Let me preface this by saying: Petra is too amazing to be understood in digital picture format. It's older than anything in the United States (300 BC). As for a little background you might understand: Do you remember Indiana Jones and the Last Crusade? The one with Sean Connery? Remember when Indiana is riding his horse through the valley at the end to find the temple with the Holy Grail in it? That's Petra.

You roll up to this hilly little town, very reminiscent of Tijuana, Mexico. The first thing I see walking up to the entrance is this... 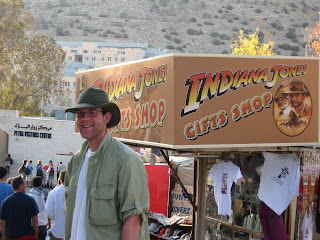 Not Pictured: Intelligent Humor
After assembling our tour group, we learn that most of the buildings and other structures in Petra are either tombs for ancient Nebeteans or homes. So, being sentimental, I poured one out for my Nebetean brothaz. 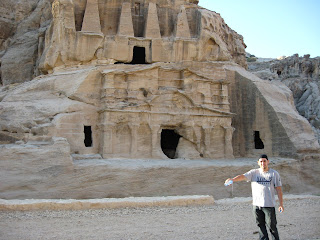 Then after seeing MORE GODDAMN CATS EVERYWHERE, we walked through the siiq (or crack) that Harrison Ford rode his horse through. It was pretty intense, as there was horsey landmines all over the place. 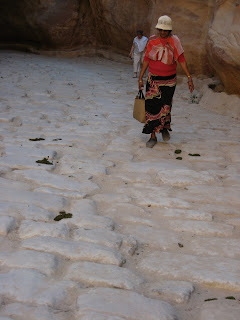 Charming.
After seeing some crazy carvings on the walls- 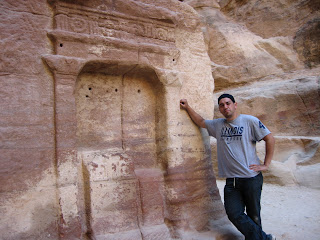 Yes, I am wearing Illinois Lacrosse gear. And my GWAR hat.
We saw the TEMPLE OF THE HOLY GRAIL (real name: the Treasury) 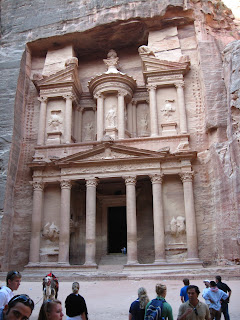 It smelled like pee pee. Weird.
So that was cool. We walked around the place some more and got hassled by every man, woman, and child for camel rides, donkey rides, horse rides, necklaces, bracelets, curvy daggers (they sucked, believe me I checked), postcards, even ROCKS. They would promise me everything was 1 JD, and after inquiring price would magically jump to 7 JD! 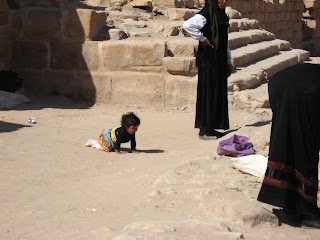 Literally 5 seconds after I took this, the baby ate a cigarette butt.
We walked around Petra all day, seeing all the different tombs, monasteries, theatres, caves, Byzantine churches, Roman ruins and all flavors of animal feces. The place is gigantic, and we didn't even see half of it in one day. I'll probably go back at some point, at least to see where Moses's brother Aaron is buried. 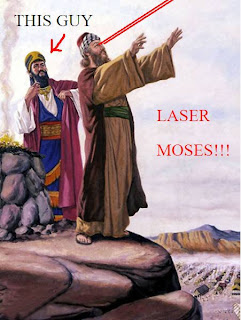 I got bored.
All in all, Petra is mindblowing. The only thing I had ever been too that ancient was the pyramid in Mexico, but that was never in AN INDIANA JONES MOVIE!!!

See me? I'm on the left.
That's the end for the weekend trip to southern Jordan. So after this its back to mediocre jingoist social commentary...
Posted by Greg at 4:26 AM